A human trafficker. A city suffering economic instability. A man and woman who are the only ones who can fix this mess - or be the ones responsible for the whole world burning...

East coast girl Sylvia has been trapped in Portland, Oregon for a year, trying to make ends meet with her tenuously legal professions. When she's arrested yet again for solicitation, she's reunited with Agent Joseph Montoya, a man she has a history with.
A hot, chemically-charged history full of desire, heat, and irrevocable mistakes.
Joseph has an unusual proposition: if Sylvia goes undercover as the newly hired girlfriend of billionaire Alexander Sheen, a man under investigation for running a human trafficking operation, she'll have her record cleared.
For a woman who has had nothing but bad luck over the past year, the offer is tempting. But Sylvia isn't one to jump into danger - although she is one to jump into love. Which is something else Joseph offers her, even though they both constantly deny it.
Both Sylvia and Joseph have more than a criminal mastermind to overcome if they want to open their hearts again. They have to set aside their heartbroken pasts and realize that they're no longer a pair of damaged goods with no hope for real love.
It's going to take a lot of convincing. For the both of them.

Tears fell down her cheek. Where had they come from? Why were they here? Why now? Why here? Did she really need to cry in front of Joseph to prove that she was human? God, this is the last thing he needs to see the day before I go undercover for his investigation. Sylvia compensated by sitting still as death in her seat and staring teary-eyed at the dark river, stuffed full of private boats gazing up at the fireworks. All of downtown Portland was alive with good times, and here she was, sitting in some lonely man's apartment, crying over enchiladas.

It wasn't fair. What the men of her life had done to her had never been fair.

More tears. More embarrassment welling from within. If I don't move and simply cry, I can save some face. What a way to be brave in front of a cop with a sadder story than hers. Damn cops always have sadder stories than I do!

Joseph got up from his seat, snatching his own napkin off the table. Sylvia, still frozen where she sat, barely registered him standing next to her and lightly brushing away her tears with the napkin. Yeah. Embarrassing. That explained everything.

"I'm sorry about what's happened to you too," he said softly. The napkin lingered on her cheek. "The world is not a kind place, even when you're in love."

"You don't have to tell me twice."

His fingertips brushed the stray hair away from her forehead. Was there anything he could do that wasn't overflowing with tenderness? Don't do this to me, Joseph. She had such a weakness for men like him: handsome, intelligent, confident... seemingly romantic, even if it turned out they were sociopaths who never gave a real fuck about her. She had sworn she would never fall for such false promises again. Never.

So why was her heart quickening, her body throbbing with the need to hold and be held?

Why was he touching her like this, as if he couldn't hold himself back a moment longer?

Ah, God. They were doomed.

As soon as Sylvia accepted that truth, she nodded to Joseph, imploring him to change their memories of this holiday, for better or for worse. Her nod was the final cue he needed to go ahead and kiss her as if he had never done it before. 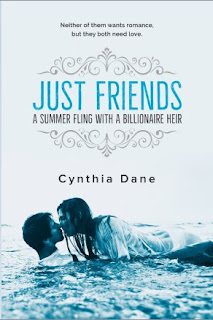 Neither of them wants romance. Too bad that's what they desperately need. Rachel Taylor's  freelance business barely pays her own bills, let alone her mother's. Her social life is confined to one friend working at the neighborhood coffee shop. And  her love life? Duds and heartbreakers. Then  hot, young, and artistically talented Zachary Feldman  walks into her life. Too bad she's just made a vow of celibacy. Sometimes what an old, broken heart needs is a  second chance at love. Playboy Zack, third son of the affluent Feldman Steel empire, doesn't have a lot expected of him. Which is why he  spends his whole day on his yacht  when he's not pursuing his next artistic endeavor. Women are amusements. And  no one amuses him more than Rachel , the beguiling woman he meets in a quiet coffee shop. "I'm not ashamed to say I'm halfway to loving you." A game of hard to get culminates with  Rachel agreeing to one thing: being "just friends"