His Domination: The Trilogy

September 30, 2015
All three parts - and the novelized version - of HIS DOMINATION are available now. Check it out! 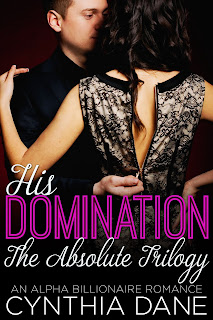 "I'm never alone. He haunts my dreams. My consciousness. The man took ten years of my life, and now I'm expected to pick up the trust he stole when he shattered my heart.

And Mr. Warren dares to think he can make that all go away?"
When Monica ran away from the Dom who mistreated her, she thought she would never be in a relationship again. Heartbroken and wounded, she now devotes her life to a business catering to the depraved elite.

Then Mr. Henry Warren walks into her world, offering her an escape from the pain that haunts the scars on her body. What he doesn't understand is that a woman like Monica knows what pain is all too well - and no longer knows the difference between a Dom who will take care of her... and one who will destroy her.
But she's falling for his pursuits. His charms. His handsome manners. His promises of kindness... with more than a hint of kink.

The only way Monica can heal is by submitting once again.
His domination is the cure.
---EXCERPT--
Breath tore from her throat, her chest, and into the empty air between them. How dare he... How dare he what? Want her? Recognize her? Know her? Her skin was sweaty, making the collar slip between her fingers. Her nail grazed against a diamond, a lump going down her throat. Those eyes... Piercing into hers. Seeing her soul. Picking apart her brain and feasting on the morsels she offered. The only thing keeping her from sitting up and kissing Henry Warren was the blaring alarm going off in the back of her head. Idiot.

"You would have to be a submissive woman to run a place like this. I can hear these walls echoing with your need to be touched tenderly and with the determination that only a man like me can provide."
Another swallow. "You are sure of yourself."

"Don't insult me, Monica. Are you telling me that I know who you are, but you don't know me? We're two halves balancing each other out. We're Yin and Yang. And you have so much Yin. You really should find an outlet for it before you're consumed by your own energies. You know what? Same could be said for me. We need harmony."

"Don't insult me... you don't know me...?" He didn't mean from a previous encounter. He meant that knowing notion that they were two halves of the same whole. Yes. Of course Monica had noticed it. Hadn't she been fantasizing about Henry until she cried? Because he's one of them. A Dom. Henry never said he wasn't. Oh, God. This was not making her position any easier to bear. I want you, Henry Warren. I want you to make me feel like I used to. All the pent up stress and frustration was like a ticking time bomb in her gut. Monica could ignore it as long as no one else was around. From the moment Henry entered her life, she wanted him to dominate her until she was harmonious again.

She wondered if he was feeling it too. A mighty desire to take out his power on a ready submissive woman. Let it be me...
The collar grew hot in her hand. If she put it on, she could have him. Right here. Right now, in her office. Or the bedroom next door. Monica clutched her chest and averted her eyes so those blues no longer destroyed her. It also kept her from kissing the damn man.

Henry lifted his hand, knuckles hovering next to her cheek. "If there's someone else..."

"No." She spat it too quickly, before her emotions could be purged. "There is no one." Monica had to tell herself that until she finally believed it.

"So then..." Henry did not dare touch her. Monica wanted him to, for two reasons: first, she wanted the man to put his hands all over her. Second, if he touched her without permission, then she would know that he would end up being no better than a man like Jackson. No boundaries. No love for her.

But he didn't touch her. The fact tortured her.

Get it today!
Caught Healed His Domination Pursued The Absolute Trilogy